Scroll with your mouse or arrow keys to see more! 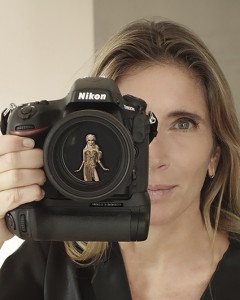 Perhaps you gave it to your daughter. Maybe it ended up in the loft. I am talking, of course, about the famous Barbie doll! In spite of everything, she is our favourite childhood doll. She is also the favourite of Cécile Plaisance, who gives her the leading role in her splendid creations.

Could you tell us about your career?

I studied Economics and Commerce, graduated with a DEA diploma from Paris Dauphine University.
After that, I worked in finance for 10 years on the European market.
Happy and in love, I then went on a world tour ending up in the United States, where I lived for 18 months.
I then worked with my husband in the IT sector.
During that entire period I always had my camera with me; I took a huge number of photographs: places, faces, groups of people, unusual objects, ethnic objects, creating a personal bestiary of souvenirs along the roads and across the seas I’ve travelled.
I have also spent a great deal of time designing and decoration all these places we’ve lived in, sometimes for only a few months, but more often for a number of years.
Furniture, fashion, jewellery, finery, artisanal objects, I’ve amassed so many things in my life that a hangar wouldn’t be big enough to contain them all!

What are your influences?

Obviously, there are a lot of them. We’re surrounded by so many splendid things; we just need to open our eyes to them.
Nevertheless, if I look at what informs my current work, I see that Pop Art painting plays a preponderant role, with artists like Roy Lichtenstein, Jean Michel Basquiat, Keith Haring, Jasper Johns and, more recently, Julian Opie…
There are also influences from Pin-Up illustrators like George Gross, Kiraz et ses Parisiennes, Edward Runci, Alain Aslan, Grim Natwick, the creator of Betty Boop, and Eric Stanton …

The sculptor and painter Mel Ramos, with his pin-ups emerging lasciviously from peeled bananas or perched on giant cigars, Niki de Saint Phalle and her blow up “birds” and papier mâchés females …
Also, I’ve always liked Pirelli and Playboy calendars … All this popular culture approach to representing sexy women, provocative without being vulgar, their sensible clothes hiding their forwardness, these women, presented in successive eras as “ideal”.
It’s interesting to see how they change over time. Unless it’s men who change …
Obviously, I’ve also taken inspiration from great photographers: Michael Dweck and his photos of surfers in the Hamptons, Helmut Newton and his femmes fatales in luxury hotel bedrooms, David La Chapelle and his taste for provocation, Richard Avedon …

How did you come to work with Barbie dolls?

Naturally, it’s linked to everything I’ve just mentioned.
I’ve had a lot of them, starting from when I was very young, and I’ve kept them carefully.
But I’ve always been fascinated by the incendiary relationship between woman as objects of violent desire, and the obligation to live in a controlled society. It’s surely paradoxical to magnify objects of desire, from childhood no less, a process that implies a good deal of barbarism, in a world of immediacy in which the need to satisfy our whims is growing exponentially.
Helmut Newton. It’s therefore natural that I began my work by paying homage to him. My first series of photos is called “Tribute to Newton” and Barbie dolls are an “obvious” point of reference.

What thoughts do they inspire in you?

Grace, beauty, latent fire, the kind of qualities that pin-ups have been exalting for over a hundred years.
But, at the same time, the hidden, the inaccessible …

The nun because she incarnates transgression and grace.

Why do so many of them undressed?.

Beyond the myth of woman as object, I wanted to uncloth the idol of our childhood, as a kind of gesture of support for women around the world whose rights are not respected. Like bare-breasted women, now liberated, defending their rights, their desires, their conquered freedom. My photos do not show the newspaper read by busy women still wearing their sexy underwear, the black dress worn by reserved women, the nun’s outfit, the burka worn by veiled women … But, we should be careful, one woman can hide another! Beyond cultures, clothes and life paths, women aspire to live their multiple lives fully and intensely. No Taliban is going to stop this dynamic …

What kind of messages and emotions do you want to foreground in your photos?

Above all, I try to show that life can be enchanting if you know how to have fun … I hope that people get a sense of how much fun I’m having myself … Life is miraculous, and we have to have a sense of humour, whatever happens.
But my Barbie photos also enable me to deliver a message. In my view, all religions have the same value; there isn’t one that’s superior to the others. And, above all, there is no religion that can justify flouting women’s rights. Women should be equal to men and should be free to do whatever they want with their image and their bodies. I dream of a world where women could take back their Liberty, wherever they live around the world and whatever religion they have. In 2017, no woman should be afraid of going out alone, of driving a car, of listening to music or having a drink in a bar with some friends. No women should be afraid of wearing a mini skirt in the street…No women should hide in a house waiting for her husband to come home.

What approach do you take to transforming your Barbie dolls?

A little inspiration and a lot of work. Preparation, make-up, styling, lighting, post-production.
Every image requires many hours of preparation and retouching work. I have become very adept at Photoshop. Every image needs around 50 hours of work.
I work with lenticular prints, superimposing images, leaving the Barbie doll to undress depending the angle from which we view the photo.

You started to shoot real models why?

First, to have a human contact in my work. Barbies are very wise girls but they don’t speak much.
Secondly, because I love femininity. I want my pictures to be a Hymn to femininity.
Moreover, despite the feminist point a view, Iike with my Barbies, beautiful woman can also deliver strong messages. Charismatic Models and Women are able to say things, to show points of view, more convincingly than others. And this is my job, as a photographer, to highlight those messages through their appearance.
Lastly, I would like every woman to be able to identify themselves in my new series and I believe it is easier with a real human model than with a Barbie.

Do you do other things as well?

Well, you know, I don’t have a minute to myself. These young and pretty girls take up all of my time. Luckily, I have understanding children and an extraordinary husband.

Cécile Plaisance’s photographs can be found in prestigious private and corporate collections such as: